Portland Mayor Ted Wheeler told police Sunday night that he used pepper spray on a man who had been harassing him about Covid-19 mask policies outside of a restaurant.

“He had no face mask on and got within a foot or two of my face while he was videoing me,” Wheeler said in a voluntary statement to the Portland Police Bureau.
Police do not know the identity of the man who was sprayed and has so far received no complaints, they said. When asked about the rumored incident during a news conference Monday, Wheeler said, “I can tell you there was an incident, I filed a police report, and that’s all I can tell you right now.”
The mayor’s office told CNN Monday evening that Wheeler does not have any further comment to make.
The US Centers for Disease Control and Prevention advises restaurant-goers to sit outdoors, at least 6 feet apart from other groups, and wear masks whenever patrons are not eating or drinking, according to guidance last updated January 6. 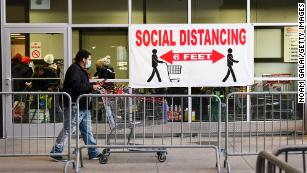 Everyday activities are more dangerous now that new Covid-19 variants are circulating, expert says
In the statement to police, Wheeler said he was approached on Sunday outside the Hillsdale McMenamin’s pub by a man he did not recognize. The man said he had been photographing the mayor while he was in the restaurant’s tent and accused the mayor of being in the restaurant without a mask against Covid-19 policies, Wheeler said in the statement.
close dialog
The man appeared to be recording him with a cell phone, Wheeler said, adding that he told the man people are allowed to temporarily remove a mask for eating and drinking at a restaurant, the statement said.
Wheeler said the man followed him to his car.
“I became imminently concerned for my personal safety, as I had recently been physically accosted in a similar situation,” Wheeler said. The mayor says he first gave a verbal warning that he was prepared to use the pepper spray, and then sprayed the man in the eyes.
Wheeler was confronted earlier this month at a restaurant by a group of people shouting obscenities, and “one member of the group started swatting at the Mayor and made physical contact with him.”
The police report said Wheeler was with former Portland Mayor Sam Adams at the time, who confirmed the incident to an officer. Adams did not immediately respond to CNN’s request for comment.
Adams attempted to video record the encounter, but only was able to capture the audio, which is consistent with both Wheeler and Adam’s story, the police report said.
Wheeler and Adams both say Wheeler tossed a water bottle toward the man so he could wash out his eyes but did not remain at the scene. Shortly afterward, a staffer to the mayor called police to initiate the report.