President Joe Biden’s early moves on immigration signal his determination to learn from past efforts to reform the system, but that doesn’t mean he won’t repeat their legacy of frustration.

In several key respects, Biden already is approaching the herculean task of immigration reform with a strikingly different strategy than the past two presidents who tried to restructure the system, Republican George W. Bush and Democrat Barack Obama.
While both men introduced proposals to comprehensively rethink almost every aspect of immigration law, Biden’s plan stresses legalization of the undocumented, the top Democratic priority, while offering little on the key asks of business groups and Republicans: guaranteeing future flows of temporary workers and toughening border and interior enforcement.

In the past, George W. Bush and Barack Obama sought bipartisan support for comprehensive immigration reform: The problem is it allowed Republicans to demand way too much in the sausage-making and, in the end, still kill off immigration reform.

That choice reflects another big change from the past: While Bush and Obama both engaged in extended bipartisan negotiations that ultimately failed to produce a law, congressional Democrats and immigration advocates appear unlikely to enlist in such an elongated effort again.
Congressional Democrats and immigrant advocacy groups seem content deferring initially as Biden seeks Republican support for change. But it’s clear that both groups have only limited patience for that approach if Republicans don’t quickly show signs of interest.
“My goal is to see if there are some legitimate players on the Republican side who want to invest a little capital and are serious,” Sen. Bob Menendez, a New Jersey Democrat who’s the legislation’s chief Senate sponsor, told me. “If the answer to that is yes, I would take weeks with them. I am not going to take months with them.”
close dialog
The Democratic skepticism about pursuing lengthy negotiations with Republicans underscores the challenge Biden will face squaring his immigration goals with his promise to promote “unity” and find more common ground across party lines. On immigration, as on most of his other priorities, his promise to work with Republicans collides with the liberal tilt of his own proposals, a Republican Party that has moved to the right even since his tenure as Obama’s vice president, and a Democratic base highly dubious that meaningful cooperation is possible with that modern GOP — and thus eager to use special legislative tools to move forward without it whenever possible. 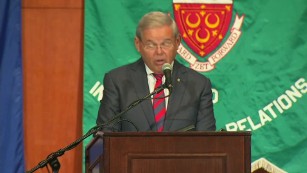 Sen. Bob Menendez
“In the past, George W. Bush and Barack Obama sought bipartisan support for comprehensive immigration reform: The problem is it allowed Republicans to demand way too much in the sausage-making and, in the end, still kill off immigration reform,” says longtime immigration lobbyist Frank Sharry, founder and executive director of the advocacy group America’s Voice. “Biden is presenting a bill that unifies and inspires the entire Democratic coalition. In effect, he’s saying, ‘Work with me in good faith, Republicans, to get to 60 votes, and if you don’t’ — and most of us assume they will not — ‘we’ll find a way to get something done with our 51 votes.’ “
But Biden and the immigration advocates face a challenge that will shadow almost all aspects of his legislative agenda: The threat to freeze out Republicans and pass immigration legislation solely with Democratic votes works only if every Senate Democrat is willing to vote to end the filibuster — or to legalize millions of the undocumented through the special budget “reconciliation” process that allows bills to clear the upper chamber with 51 votes (including a tie-breaking vote from Vice President Kamala Harris).
And it won’t be easy to convince every Democrat that allowing millions of undocumented immigrants to legally enter the workforce is a defensible idea while millions of other Americans are out of work amid the disruption created by the coronavirus pandemic. Assuming that all Democrats will unite around a reconciliation strategy, says one top business lobbyist who asked to remain anonymous while discussing the group’s internal calculations, is a combination of “wishful thinking and bluster.”
Or, as Muzaffar Chishti, a senior fellow at the nonpartisan Migration Policy Institute, puts it: On immigration reform, “there’s a big difference between hope and experience.”

Biden’s early moves on immigration mark a clear reversal of the policies under Trump, who moved in almost every way possible to restrict both undocumented and legal immigration. But Biden’s posture also constitutes a departure from the tactics employed by Bush and Obama, who engaged in exhaustive bipartisan negotiations seeking a comprehensive overhaul.
That process was led by the late Sens. Edward M. Kennedy, a Massachusetts Democrat, and John McCain, an Arizona Republican, under Bush in 2006 and the bipartisan Senate “Gang of Eight” under Obama in 2013. Each time the negotiations produced a broad immigration bill that cleared the Senate with bipartisan support (though with notably fewer Republican senators supporting the package the second time). But while advocates believed they also had majority support in the House, the GOP leadership that controlled the chamber in both 2006 and 2013 refused to bring the bill to a vote, killing it.
While Bush and Obama largely employed similar strategies, Biden has quickly indicated he intends to pursue a very different approach.
Bush and Obama, for different reasons, did not seriously pursue immigration reform until their second terms; Biden revealed the outline of his immigration bill on his first day in office. That signals a very different level of commitment. 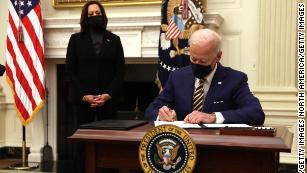 Here are the executive orders Biden has signed so far
“I am hopeful that we can do more than less because I never had a president who put his back into it,” says Menendez, who arrived in the Senate just as the 2006 effort unfolded.
Also different: While Bush and Obama pursued the “three-legged stool” of legalization for the undocumented (a Democratic priority), guaranteeing future flows of temporary workers (key for business) and tougher enforcement (a Republican emphasis), the plan Biden released offers relatively little on the latter two.
As Sharry notes, that partly reflects a big shift in strategy: Democrats in effect are telling Republicans and their allies in the business community that any bill will reflect their concerns only if they produce GOP votes for the overall package, including a pathway to citizenship for the undocumented. But it also reflects a conviction among immigration experts in both parties that Trump already implemented almost every element of the right’s hardline enforcement wish list without stabilizing the system.
“Over the last four years the world has skewed dramatically to the right on the question of enforcement — the wall, we have enough Border Patrol [agents] to put hands across the border almost, and [more] ICE agents, and the ‘stay in Mexico’ policy, the list is endless,” says Menendez. “On the enforcement side, that’s all we’ve had for the last four years. It’s a recognition that there has been a lot of enforcement out there; and second, a recognition there are better ways to do enforcement.” 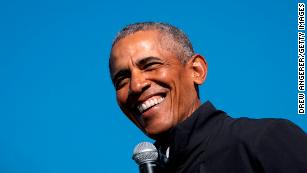 In this October 31, 2020, file photo, former President Barack Obama speaks at a campaign rally for Joe Biden in Flint, Michigan.
Even some Republican immigration experts second that conclusion.
Biden underscored the message from his legislative proposal by releasing on his first day new enforcement guidance for the federal immigration agencies that will pause most deportations (except for people considered the greatest threats) for his first 100 days while repealing Trump’s travel ban on several Muslim-majority nations and freezing construction of his predecessor’s border wall.
That marks another sharp departure from Obama’s approach. During his first two years, Obama ratcheted up immigration enforcement and deportations. His goal was to make congressional Republicans more comfortable voting to legalize the undocumented by proving he would ensure border security — or at least to deny them the excuse that they could not vote for legalization until the border was secured. After two years of tough enforcement, Obama went to El Paso, Texas, in 2011 and declared, “We have gone above and beyond what was requested by the very Republicans who said they supported broader reform as long as we got serious about enforcement. All the stuff they asked for, we’ve done.”
And yet, even after Obama’s enforcement offensive, legalization still failed because not enough Republicans — especially in the House — supported it, while immigrant advocates bitterly labeled him the “deporter in chief.”

After the bruising President Donald Trump years, Democrats and immigrant advocates are even more dubious that more than a handful of congressional Republicans will support legislation that includes a pathway to citizenship for the undocumented, no matter the concessions offered to them on temporary workers and/or border security.
As Trump has increased the GOP’s reliance on the non-college-educated, non-urban, and evangelical Christian White voters most uneasy about the way the nation is changing demographically and culturally, hostility to immigration in all forms has become one of the strongest threads binding the party.
At the grassroots, polling by the nonpartisan Public Religion Research Institute has found overwhelming support among Republicans for Trump’s travel ban on majority-Muslim countries, his border wall, and reducing legal immigration; nearly half of Republican voters even supported his policy of separating parents and children on the border (which did prove a bridge too far for some GOP elected officials). Almost three-fifths of Republicans in a recent Public Religion Research Institute poll endorsed the harshly-worded sentiment that “immigrants are invading our country and replacing our cultural and ethnic background”; an agreement was even greater among Republicans who rely primarily on Fox News for information. 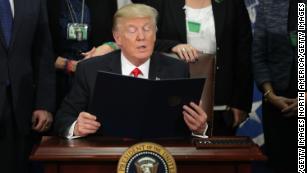 Trump lays last-minute land mines for Biden on immigration: ‘Anything to make it difficult’
In Congress, most Republicans endorsed Trump’s aggressive measures to restrict immigration — such as declaring a national emergency to redirect money toward his border wall after Congress refused to appropriate it or slashing refugee admission levels — and almost three-fourths of Senate Republicans supported legislation to cut legal immigration in half, though that Trump-backed bill ultimately failed.
All of this reflects the party’s retreat under Trump to the parts of the country least touched by demographic change: After November’s Democratic gains in Arizona, Colorado, and Georgia, Republicans, rather remarkably, hold just four of the 40 Senate seats in the 20 states with the highest share of foreign-born residents.
Already in Biden’s first week, prominent Republicans — including House GOP leader Kevin McCarthy of California and Florida’s Sen. Marco Rubio, who has shifted sharply to the right after helping to negotiate the 2013 Senate deal — have denounced the new President’s plan as a “blanket amnesty” and a threat to American workers forced from their jobs during the pandemic.
Fox and other conservative media outlets are already touting the alleged threat of new “caravans” of migrants making their way toward the Southern border. Ken Paxton, the Republican Texas attorney general, a frequent antagonist on immigration issues during Obama’s presidency, is suing to block Biden’s deportation freeze. And, of course, the risk of denunciation from Trump looms over any congressional Republican considering cooperation with Democrats on legislation that legalizes any population of undocumented immigrants.