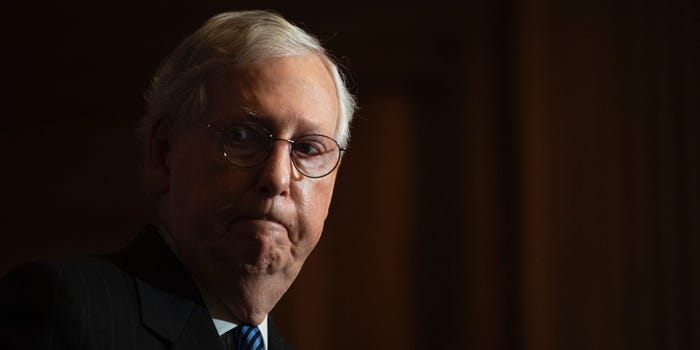 President Donald Trump on Tuesday night launched a surprise push to hike the stimulus checks in the COVID-19 relief package to $2,000 per person from $600.

Democrats cheered his demand, piling pressure on Senate Majority Leader Mitch McConnell and leaving him in a no-win situation.

Trump released a video criticizing the $900 billion coronavirus relief package that congressional lawmakers passed on Monday and demanding they increase the checks.

This leaves the next move to McConnell, who has for months insisted on a smaller stimulus package and has rejected Democratic proposals for $1,200 checks.

He now has two undesirable options:

It’s worth noting that even if Trump vetoes the spending bill — which he did not explicitly threaten to do in his video — Congress could force it through by overriding the veto.

But that could be politically damaging, and there’s no guarantee that the congressional math will stay the same in light of Trump’s new demand.

One reason McConnell may fear blowback for keeping the checks at $600 is the runoff elections for Georgia’s two Senate seats, which the GOP needs to hold to keep control of the chamber.

The New York Times reported last week that McConnell backed including stimulus checks in the package after hearing that opposition to them was harming the Senate campaigns in Georgia.

Schumer called out McConnell on Twitter on Tuesday. “I’m in. Whaddya say, Mitch?” he said. “Let’s not get bogged down with ideological offsets and unrelated items and just DO THIS! The American people deserve it.”

Rep. Alexandria Ocasio-Cortez, a progressive Democrat, said she and Rep. Rashida Tlaib had written an amendment that was “ready to go.”

“We can pass $2k checks this week if the Senate GOP agrees to stand down,” Ocasio-Cortez said.

The $900 billion package was the product of talks with a bipartisan group of senators after months of failed negotiations between Democrats and Republicans over how much should be spent and on what.

Aides told The Washington Post on Tuesday that administration officials spent the past few days negotiating the stimulus package without explicitly consulting Trump, adding that he was distracted by his efforts to overturn his loss in the presidential election.

Previous reports said Trump aides had talked him out of insisting on larger checks during the negotiations for fear of ruining the chance of a deal.

Evidently, they succeeded only in delaying the demand — and creating an acute problem for his own party.