New York (CNN Business)In his first year in office, President-elect Joe Biden will have many crucial decisions to make. One of those important choices is who will oversee the Federal Reserve after Chairman Jerome Powell.

While Powell’s term isn’t up until February 2022, speculation is already buzzing about a potential second term — and his eventual successor. Powell is likely to face questions about his future at a news conference Wednesday, when the central bank is widely expected to announce it is keeping interest rates at zero.
A few names are floating around: Some experts say Lael Brainard, a current Fed governor, would be an obvious choice to succeed Powell in 2022, or after a second Powell term. Another buzzed-about potential option is former Fed vice chair Roger Ferguson — especially since he recently announced plans for his retirement as CEO of asset manager TIAA.
But Biden may very well want to keep Powell, a President Trump nominee, as Fed chair to ensure continuity at the helm of the central bank at a time when the economy is still fragile. In either scenario, the Senate would need to vote to confirm a new chair or reconfirm Powell.
Sticking with Powell would be similar to how Biden’s former boss President Barack Obama handled it: He renominated Ben Bernanke in 2009 in the midst of the Great Recession.
Powell has been the architect of the Fed’s numerous 2020 stimulus programs, which have helped to stabilize the economy and financial markets during the Covid-19 pandemic. 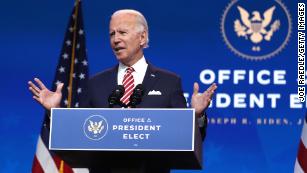 A Biden stimulus deal could finally push bond yields higher
But just as President Trump decided to go with Powell instead of nominating Bernanke’s successor Janet Yellen for a second term, Biden could decide to mix things up and appoint a new Fed chair, putting his administration’s stamp on one of the most powerful economic positions in the world.
The Fed declined to comment on Powell’s potential for a second term. Spokespeople for the Biden transition team were not available for comment. TIAA was not available for comment on Ferguson’s plans.

Brainard would seem to be a logical choice. She was considered a potential front-runner for Treasury Secretary but Biden chose Yellen for that post instead.
At a bare minimum, keeping Brainard at the Fed could mean that she’s in line to eventually be nominated as Fed chair after a potential second Powell term ends in 2026.
That, of course, assumes that Biden is re-elected four years from now or that another Democrat, such as Vice President-elect Kamala Harris, wins the 2024 election.
On the one hand, changing Fed chairs in the middle of this economic crisis may seem like a risky move, especially because economists and market strategists across the board have praised Powell’s swift actions in the spring to quickly tackle the economic crisis.
“Powell has done a fine job under extraordinary circumstances. He has been a competent and steady hand,” said Guy Le Bas, chief fixed income strategist at Janney.

Holding steady at the Fed

Ferguson — who was reportedly under consideration for Fed chair in 2013 before Obama chose Yellen — “has great experience in the private sector and would be extremely welcomed” by investors, said Le Bas. He also praised Brainard for her policy expertise and international focus.
A potential new Fed chair in 2022 also would probably not change many of Powell’s policies.
“There is no obvious need for the Fed to respond with more stimulus right now, but it still has to be seen as dovish so the market understands it will provide more support to the economy,” said Tony Rodriguez, head of fixed income strategy at Nuveen.
Rodriguez told CNN Business he thinks Biden would be comfortable keeping Powell in charge of the Fed, and that Powell would probably enjoy having a boss who is less likely to criticize him publicly on Twitter.
But Rodriguez added that Biden also may want to make a change.
“Biden is making a concerted effort to have a more diverse group of leaders. So that could be a reason to appoint a different Fed chair,” he said.
With that in mind, Rodriguez said it’s possible Biden could ask Powell to stay on for a bit until the economy shows more signs of stabilizing. Powell could then step down in the middle of his second term, paving the way for Biden to choose his own Fed chair before the 2024 election.