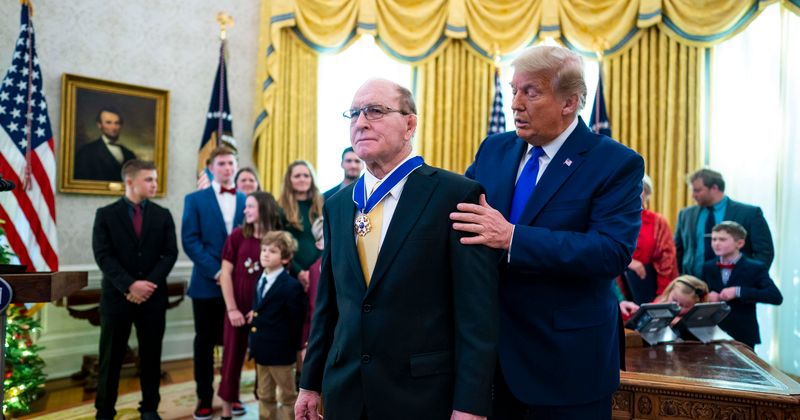 President Donald Trump presented the Medal of Freedom to wrestler and coach Dan Gable in the Oval Office on Monday, December 7. He is the first wrestler in history to receive the honor, as reported by CNN. “No one has done more to promote wrestling in America than Dan Gable. He’s an athletic giant who conquered one of the most difficult and ancient sports in the world,” Trump said during the ceremony. “He’s the greatest wrestler, probably, ever. We’ve never had anybody like him. He’s made our country very proud. And he’s a true GOAT. You know what GOAT is? GOAT? Greatest Of All Time.”

However, there was one incident that got Twitter talking. Trump abruptly left the Oval Office not too long after presenting the medal. The CNN report stated, the ceremony was the second time in a week that POTUS awarded the medal. Those present in the Oval for Gable’s ceremony included Iowa Republican Senators Joni Ernst and Chuck Grassley, who returned to his Senate office last week after testing positive for the coronavirus. “I thank you very much for giving this kid here the opportunity to reach this level of the highest award a civilian can get, the Presidential Medal of Freedom. … And to the sport of wrestling, being the first to win this award becomes a higher challenge to all that participate,” Gable said while accepting the medal. As reported by Des Moines Register, also present was his family — his wife, Kathy, four daughters, Molly, Jenni, Annie and Mackie, and their husbands and his 13 grandchildren. However, in video clips seen of the event, most people present there were seen without masks.

Gable had won three state high school championships for Waterloo West and two NCAA titles for Iowa State University. Between his prep and collegiate careers, Gable went a combined 181-1, losing only in the 1970 NCAA finals. The athlete won gold at the 1972 Olympics, where he won six matches at 68 kilograms (150 pounds) and didn’t allow a single point along the way. During his time as a coach, he guided the Iowa wrestling program to 21 straight Big Ten titles and 15 NCAA team championships from 1976 through 1997. He produced 152 All-Americans, 46 national champions and 12 Olympians who combined to win eight Olympic medals — four gold, one silver and three bronze. The report states that even during his retirement he worked for the benefit of wrestling.

In 2013, Gable used his reputation and knowledge to help keep wrestling in the Olympics after it was at risk of being on the chopping block. Not only has wrestling remained, but the US has flourished on the international level.

Vox journalist Aaron Rupar posted the clip of him walking off and wrote: “This is unreal. Trump abruptly walked out of Dan Gable’s Medal of Freedom ceremony today, leaving Gable shrugging and at a complete loss about what he was supposed to do.” It is believed that the press tried to ask Trump questions about attending the inauguration of Joe Biden and things of that nature and Trump refused to take the bait and just kind of walked out, looking agitated, leaving Gable and his family hanging in the Oval Office.

Others extended their wishes. One said, “Congrats Dan Gable! His legacy lives through every one of us wrestlers/coaches in this country.” Another opined, “And now is the moment where wrestling fans should allow Dan Gable to have HIS moment… Quite sad that people have to inject their political agenda into HIS moment… It’s a great honor and he’s a legend in our sport- show some respect! It’s not about you.” Politician Randy Feenstra wrote: “Thank you @realDonaldTrump for presenting Iowa wrestling legend Dan Gable with the Presidential Medal of Freedom. An incredible honor and well deserved!”